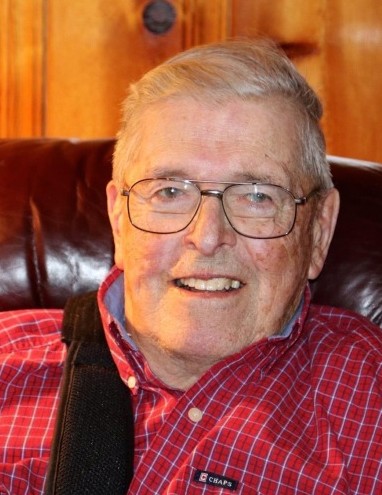 Arch Leach Simmons, 93, of Staunton crossed over the river to rest under the shade of the trees on Sunday, May 10, 2020.  His family supported him on his journey from his home.

He was born March 20, 1927 in the Totten Community of Pendleton County, WV, a son of Clarence and Ella (Leach) Simmons.

He was a member of Christian Fellowship Baptist Church in Swoope. Mr. Simmons spent his career fabricating and maintaining machinery for Basic Witz Furniture Company and retired from Stanley Furniture Company in 1992.

Archie was a well-known jack of all trades, who never met a stranger. He was an accomplished woodsman, carpenter, gunsmith, machinist, and mechanic who took pride in crafting things with his hands.  Following in his father’s footsteps, he milled lumber for many homes in Highland, Pendleton, and the surrounding counties.  If he needed a particular tool that he could not find, he crafted that as well.  A civil war enthusiast, Arch took particular pride in rebuilding 1800’s era muskets and carbines and was a proud founding member of the Jeff Davis Legion of the North-South Skirmish Association, competing in his last skirmish at the age of 89.  Nothing however, made him prouder than his grandchildren and great-granddaughters.

On June 29, 1974 he married Mary Jane Hilbert Simmons, who survives.  Also surviving are his daughter and son-in-law, Betty S. and Delbert Rexrode, Jr, a granddaughter and her husband, Letitia and Chris Amirault, a grandson and his wife, Jason and Sarah Rexrode, and two great-granddaughters Katherine and Rachael Amirault, all of Doe Hill; and numerous nieces and nephews.

In addition to his parents, he was predeceased by two brothers, Richard and Harlan Simmons.

Memorial contributions may be made to the N-SSA in memory of Arch Simmons, PO Box 218, Crozet, VA 22932.

To order memorial trees or send flowers to the family in memory of Arch Simmons, please visit our flower store.