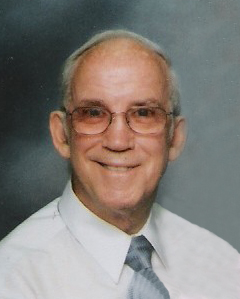 Dennis Simon Mock, age 86, formerly of the Williamsville community of Highland County, VA, went to be with the Lord on Monday, May 9, 2016.  Mr. Mock had been residing at the home of his daughter in Mount Pleasant, TN since June 2014.

Mr. Mock was born on September 5, 1929 in Thorpe, Wisconsin, a son of Alfred (Fred) W. and Ruth A. (Briggs) Mock.  He graduated from Stanley High School, Stanley, WI in 1948 and was drafted into the U. S. Army in 1951.  He served in Germany as a field artilleryman, then in the army reserves before being honorably discharged in 1953.  On June 6, 1953 he married Anita Brandt, his beloved wife of 60 years.  She preceded him in death on January 10, 2014.  His parents, 6 brothers, a half-brother and 2 sisters also preceded him in death.

During his life, Mr. Mock worked as the Official Butterfat Tester for the state of Wisconsin, as a dairy herdsman, a salesman, a tractor-trailer driver and instructor, and as the owner-operator of a steam carpet cleaning business.  He enjoyed hunting, organic gardening, woodworking and carpentry.  He and his wife designed and built three houses together during their married life, the last one being located in Highland County, VA.  He also helped build several church buildings.

Until ill health hindered him, Mr. Mock faithfully attended church and served the Lord in various capacities.  At the time of his death he was a member of Old Paths Baptist Church in Buffalo Gap, VA.

A funeral service will be conducted 11 a.m., Friday, May 13, 2016 at Obaugh Funeral Home in McDowell, VA with Pastor John Smith officiating.  Burial will follow in McDowell Presbyterian Cemetery.  Grandsons will serve as active pallbearers.  After the committal a meal will be served at the Stonewall Ruritan Building. The family will receive friends one hour prior to the service at the funeral home.  Additionally, the funeral home will receive friends from 5 p.m. until 8 p.m. on Thursday, for those wishing to pay their last respects.

In lieu of flowers, memorial contributions may be made to McDowell Presbyterian Cemetery on the Hill, c/o Shannon Maloy, 1982 Bullpasture River Rd, McDowell, VA 24458.

To order memorial trees or send flowers to the family in memory of Dennis Mock, please visit our flower store.