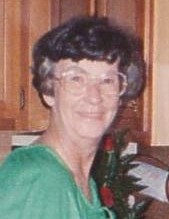 She was born April 22, 1931 in Doe Hill, a daughter of the late William Mason and Edna Frances Stogdale Armstrong.

Mrs. Garber was a member of Christ United Methodist Church and had retired from Marshall’s Distribution Center. She enjoyed needlework and crocheting.

She is survived by a daughter and sonin law, Barbara and Randy Chandler of Port Republic; five sons and two daughters-inlaw, William and Emma Wilson of Grottoes, Gerald and Robin Wilson of Verona, David Wilson, Samuel Wilson and Alfred Wilson, all of Staunton; 10 grandchildren; 13 greatgrandchildren; and two brothers, Alfred Armstrong of Doe Hill and Joe Armstrong of Dayton.

She was preceded in death by her past husband and friend, Harmon I. Wilson Jr.; a son, Harmon “Wink” Wilson; and a brother, William Robert Armstrong.

To order memorial trees or send flowers to the family in memory of Ethel Garber, please visit our flower store.