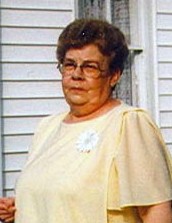 She was a member of Victory Chapel Advent Christian Church, where she served as deaconess, secretary and Sunday school teacher.  She achieved a lifelong membership to the Women’s Home and Foreign Mission Society of the church.  She was employed at Aileen Manufacturing, Inc. for many years and was a wedding director for many local nuptials.

In addition to her parents, she was preceded in death by her husband of 54 years, Mack E. Ratcliffe on August 12, 1997 and two brothers, Randolph M. Gutshall and Gray D. Carpenter.

She is survived by a son and daughter-in-law, Eugene E. and Ellen A. Ratcliffe of Monterey; a daughter, Ellen Marie Brown of Randallstown, MD; a grandson and his wife, Gregory E. and Janet P. Ratcliffe of Jacksonville, FL; two granddaughters, Penney D. Simmons of Pikesville, MD and Pamala M. King of Randallstown, MD; three great-grandchildren, Jalen, Ashlynn and Dylan Ratcliffe of Jacksonville, FL; a brother and sister-in-law, Melvin L. and Janice S. Carpenter; a sister-in-law, Wilma G. Carpenter, all of Staunton, four nieces, five nephews and many special friends.

A funeral service will be conducted at 2 p.m., Saturday, January 21, 2006 at Obaugh Funeral Home in McDowell by the Rev. Donald E. Rose.  Burial will be in Monterey Cemetery.  Active pallbearers will be Kevin, Kenneth, Keith and Stacy Carpenter, Garland Dever, Harold Ford, Doug Gutshall, Jerry Moats and Buddy Hunt.  Honorary pallbearers will be friends attending the service.

The family will receive friends one hour prior to the service at the funeral home and other times at the home of Eugene and Ellen Ratcliffe.

There will be no public viewing.

In lieu of flowers, memorial contributions may be made to a charity of your choice.

To order memorial trees or send flowers to the family in memory of Frances "Fran" Ratcliffe, please visit our flower store.