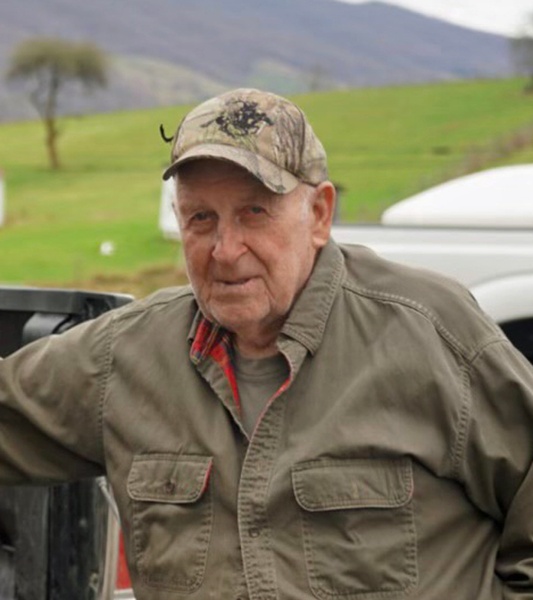 George “Goog” Junior Colaw, 92, of Blue Grass passed away, Wednesday, June 8, 2022 in the Blue Grass home in which he was born.

He spent his youth working on the family farm, and his free time hunting. He was particularly passionate about hunting foxes, but he was also an avid deer and turkey hunter.

A veteran of the U.S. Navy, Goog served in Korea from October 1950 to August 1954. On July 4, 1956 he married Anna Louise Rexrode in Moyers, WV, and the couple continued to run the family farm on Hardscrabble Road while raising their children, Greg and Martha.

As an adult, Goog was the Highland County Special Game Warden and Animal Warden for over 30 years. He was a proud member of the Blue Grass Ruritans and the VFW, as well as the Highland Mixed Bowling League. He posed for many pictures as part of the League Champion bowling team! Additionally, he was often found at his daughter’s store, Blue Grass Mercantile, where he would happily argue politics, reminisce with old friends, or tell anyone who would listen how proud he was of his grandsons, James and Lane.

While Goog was known for being extremely stubborn and strong-willed, the love he had for his family and his farm ran deep. He spent his entire life trying to better the lives of those he would leave behind, and he will be sorely missed by both his immediate family, and the entire community.

In addition to his parents and wife, he was preceded in death by brothers, Cyrus, Paul and Wayne Colaw; and sisters, Rebecca Hull, Mary Ruddick and Virginia Curry.

The staff of Obaugh Funeral Home will receive family and friends wishing to pay their respects between 9 a.m. - 7 p.m., Saturday, June 11th at the funeral home.

Active pallbearers will be James and Lane Hancock, Jody Colaw, Pat Hull, Jim, Jackie and Joe Will and Jake Colaw.

A Memorial Tree was planted for George "Goog"

To order memorial trees or send flowers to the family in memory of George "Goog" Colaw, please visit our flower store.