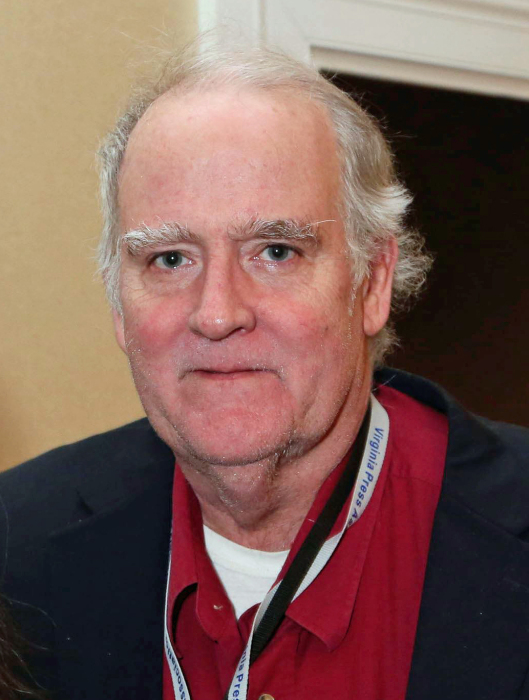 John Berry Bruce, 65, of Monterey, passed away unexpectedly, Wednesday, June 9, 2021, at his home.
He was born Nov. 26, 1955 in Alexandria, a son of the late Robert Black and Margaret Darrough Bruce.
On June 16, 1984, he married the love of his life, Carol Hogue.
John had a long and stellar career as a journalist, earning state and national awards for his writing and photography. He held a bachelor of arts degree in journalism from the University of Richmond, and was a credentialed cooperative communicator, with the National Rural Electric Cooperative Association.
He began his career as editor of the Goochland Gazette in Manakin-Sabot, where he helped achieve a more than 90 percent market penetration for that weekly community newspaper. He later became associate editor of Cooperative Living Magazine, for the Virginia, Maryland and Delaware Association of Electric Cooperatives, in Glen Allen, where he wrote news and feature articles, and shot, scripted and edited video documentation of power generation facility construction. From 1997 to 2009, he was editor of the South Carolina Living Magazine, Electric Cooperatives of South Carolina, Cayce, S.C., managing the monthly magazine and writing editorials, news and feature articles, and newsletters. He went on to become a freelance editor, writer and photographer, in Columbia, S.C., and a consultant for the National Rural Electric Cooperative Association, National Country Market Sales Cooperative, and contributing writer for RE Magazine and National Electric Cooperative Statewide Editors Association publications. He was also instrumental to the National Country Market Sales Cooperative in Austin, Texas, as founding board member, serving 10 years as board chair of the advertising sales cooperative with a circulation exceeding 7 million readers.
In August 2011, John became the Highland County news editor for The Recorder in Monterey, where he served the community for nearly 10 years with award-winning features, photography, and investigative journalism.
He is survived by his wife of almost 37 years, Carol; his son, Jacob “Jake” Robert Bruce and his wife Linghan Song of Richmond; his darling 7-month-old grandson, Connor Everett Song Bruce; and sister-in-law, Catherine Bruce of Richmond.
In addition to his parents, he was predeceased in 2003 by his two brothers, Robert and Roy Bruce.
A memorial service will be held at McDowell Presbyterian Church at a date yet to be determined.
In lieu of flowers memorial contributions may be sent to St. Jude’s Children Hospital, 501 St. Jude Place, Memphis, Tenn. 38105.

A Memorial Tree was planted for John

To order memorial trees or send flowers to the family in memory of John Bruce, please visit our flower store.