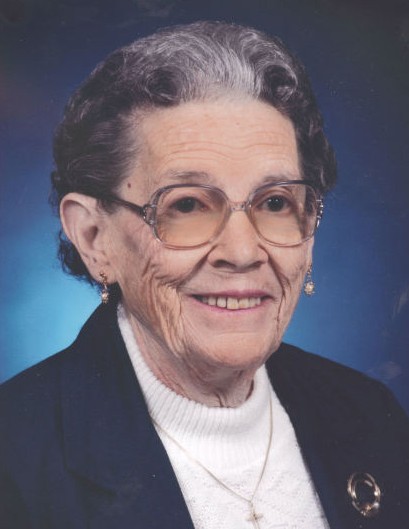 She was born Oct. 13, 1920 in Monterey, a daughter of the late Will and Elsie Propst Halterman.

On Jan. 28, 1939, she married, Roscoe C. Rexrode, who preceded her in death on Oct. 1, 1994. She was also predeceased by a son, Morris Rexrode; a daughter, Joyce Goodbar; six brothers and two sisters.

Mrs. Rexrode was a homemaker and a member of Wayside Baptist Church.

She is survived by a son and daughter-in-law, Marlin and Wanda Rexrode of Franklin, W.Va.; three grandchildren, Iona Kinkead and husband, Scott, of Stuarts Draft, Kevin Goodbar and fiancée, Misty Puffenbarger, of Monterey and Gregory Miller and wife, Faith, of Waynesboro; and three greatgrandchildren, Sarah and Andrew Kinkead and Jessica Miller.

Burial was in Bowers Cemetery.

To order memorial trees or send flowers to the family in memory of Juanita Rexrode, please visit our flower store.