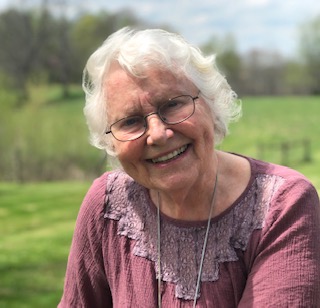 Lois Jeanette Harbert passed peacefully at home on Sunday, August 29, 2021 in Rockingham, VA. She was born to the late Edward and Ethel Nash on March 25, 1928 in Topeka, KS.

Mrs. Harbert attended Evanston's Township High School ('42-'46) in Evanston, Illinois. She then went on to complete a 4-year Bachelor of Art Degree at DePauw in Indiana ('46-'50), where she enjoyed Alpha Chi Omega Sorority life and received honors for her artwork.

She met Jason Harbert while working at a Christian Summer Camp in Estes Park, CO. They were married in Estes Park August 19, 1950. They went on to raise six children- Kathie, Susan, Laura, Mike, John, and Ellen. Most of their married life was spent in Carmel, CA.  As she raised her children, she delighted in homemaking, sewing, cooking, crafting, volunteering at Carmel Presbyterian Church and the Yellow Brick Road charity shop, and feeding many High School football players through the years that Jason coached at Carmel High School and Robert Louis Stevenson.

She began working part-time outside the home as her children began heading into college years. Her love for arts & crafts blessed many when she began teaching at Naval post Graduate Preschool ('68-70). She then became Director/Teacher at Pacific Grove Preschool Community Center ('70-82). She also worked as a drafter for Kitchen and Baths in The Barnyard (82-83), Spencer's of Carmel (84-94), Carmel Art Association (95-97), Donna Moses' Peasant Folk Collection ('97-2006), Old Saint Angela's Inn in Pacific Grove with Jerry & Dianne McKneeley ('06-'09).

Later in life as her children raised families, she enjoyed involving herself in her grandkid’s lives, volunteering her time in hospitality and small group Bible Studies at the Mayflower Church in Pacific Grove where her son Mike pastored. She moved to Glasgow, KY to dwell with her son John and family ('09-'19), followed by her last 3 years with her daughter Kathie and family in Rockingham, VA.

In addition to her parents, she was predeceased by her sister, LaRiene Corlis.

She is survived by her six children, 25 Grandchildren and 32 Great Grandchildren. She will be dearly missed, but we celebrate that she is now enjoying eternal peace, joy and love in God's presence. A memorial service will be held on the Monterey Peninsula, CA to celebrate her earthly life, most likely in the Spring of 2022. Complete service details will be announced once arrangements are finalized.

A Memorial Tree was planted for Lois

To order memorial trees or send flowers to the family in memory of Lois Harbert, please visit our flower store.

Services are to be announced