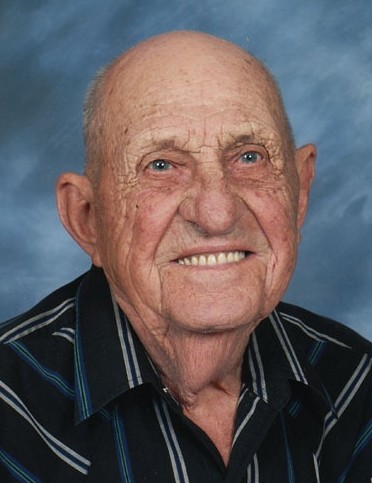 Louie Walter Smith, 83, a.k.a. the mayor of McDowell, died Sunday July 6, 2008 enroute to Augusta Medical Center.  He was born May 9, 1925 at McDowell a son of the late Isaac Clay “Bob” and Rosie Florence (Puffenbarger) Smith.

Mr. Smith retired from Virginia Department of Transportation on September 9, 1991 after 50 years of service.  He was a U.S. Army veteran of WWII, having served in the European Theatre and a member of McDowell United Methodist Church, a charter member and former fire chief of McDowell Volunteer Fire Department and a fifty year member of the Stonewall Ruritan Club.  Lou enjoyed NASCAR racing, gardening and making horseradish.

On October 9, 1964, he married Nina Virginia (Siron) Smith, who preceded him in death on January 6, 1996.  He was also predeceased by a sister, Margie O’Brien and two brothers, Howard “Rank” Smith and Virgil “Jack” Smith.

He is survived by a daughter and son-in-law, Dana Rae and Carl Vandevander, Jr. of Greenville; a son and daughter-in-law, Rodney Craig and Belinda Smith of McDowell; two sisters, Elizabeth Painter and Gladys Fockler, both of Staunton; a brother, Wilmer Carl Smith of McDowell; numerous nieces and nephews and his special cat, Bud.

A funeral service will be conducted at 11 a.m., Wednesday, July 9, 2008 at Obaugh Funeral Home with Rev. Dave Boger officiating.  Burial will be in McKendree Cemetery.

The family will receive friends from 6 to 8 p.m., Tuesday at the funeral home.

To order memorial trees or send flowers to the family in memory of Louie Smith, please visit our flower store.