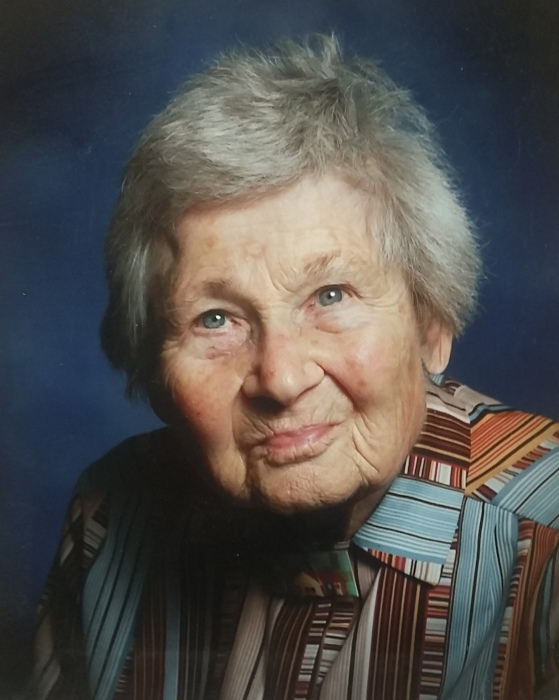 Mary Hille McCoy, 98, of Monterey, passed away April 13, 2018 at UVA Hospital in Charlottesville.

She was born on January 11, 1920 in Baltimore, Maryland, the first child of the late Dr. George Price and Mabel Hille (Jones) McCoy.

Mary Hille was a graduate of Monterey High School, where she was valedictorian of the Class of 1937. She went on to study at Farmville State Teachers College, now Longwood University, in 1941 receiving a bachelor of science and certification to teach sixth and seventh grades as well as high school home economics, chemistry, general science and English. She later pursued advanced studies at the University of Wisconsin, from which she earned a Master of Science in Home Economics Education.

Her career as an educator began in 1941. Until 1949, she taught home economics at Fairfax High School.  During the summers of that period, she worked at Camp Nimrod for Girls, where she was much-beloved for her approachability, her lack of pretense, her gusto for simple fun, and the gift she had for opening the girls’ eyes to the great and small wonders of nature.

​She expanded her scope as an instructor when she left teaching in the public schools to work with the Virginia Cooperative Extension Service.   Starting as an intern in Loudon County in 1949, she moved through the home demonstration ranks, assuming increasing responsibility until in 1980, after 30 years with the Extension Service, she retired from her last position, that of East Central District extension leader in program development and staff orientation at Appomattox. From there, she returned to Monterey to live with her sister Elizabeth Price McCoy in the home where they had grown up together. They stayed there for the remaining four decades of their lives.

Mary Hille was the last of the descendants of Charles Pinckney Jones to occupy the historic Jones homestead on West Main Street and the last of the McCoy women to live there. Her mother and sister predeceased her, her mother in 1969 and her sister in 2012.

The Charles Pinckney Jones House (known formerly as the Jones-McCoy House and the Almond-Strickler House) is on the National Register of Historic Places and is named for Mary Hille’s grandfather Charles Pinckney Jones. He was born in Franklin, Pendleton County, (now West) Virginia. As a young man, he enlisted in the Confederate States Army, in which he served as a private in the 18th Virginia Cavalry, which participated in the Gettysburg Campaign, skirmishing the Federals in western Virginia. Later the cavalry served in the Shenandoah Valley before disbanding in April 1865. He went on to attend the University of Virginia Law School, graduating with distinction in 1868, and established a law practice in Monterey. He married Martha Jane “Mattie” Wilson, also of Franklin, in 1872, and in 1873, the couple moved into their Monterey home. There, they raised a large family and Charles Pinckney practiced from the law office he established next door to his home. Three generations of Joneses practiced from that office until 1986. The building is now the occupied by realtors Clarkson & Wallace.

Mary Hille appreciated the historic nature of the home she lived in. While her grandfather lived in the home, he held several prominent elected and appointed positions in the local community, including those of commonwealth attorney and president of the Citizens Bank of Highland (which evolved into what is now Summit Community Bank), served one term in the Virginia House of Delegates, 12 years as State Senator for the counties of Bath, Highland, Alleghany, Botetourt and Rockbridge, then 8 years as member of the Board of Visitors and Rector of the University of Virginia. Like him, several of his sons and grandsons also pursued careers in law and politics. Charles Pinckney died in 1914. Following his wife’s death in 1929, the couple’s widowed daughter Mabel Hille Jones McCoy moved into the house with her two young daughters Mary Hille and Elizabeth.

She also appreciated her roots on the McCoy side. Like her mother, her father, George Price McCoy (1881-1929) also came from a large, prominent and accomplished family. George’s father, John McCoy of Franklin, West Virginia, was a well-regarded businessman who served several terms as West Virginia state delegate, continuing the tradition established by William McCoy, his father, before him. George’s brother, also named William, was an attorney and businessman noted for serving several terms as West Virginia state delegate, too, and particularly for being founder and long-time-editor of the Pendleton-Times Newspaper. Like the Jones homestead in Monterey, Virginia, the McCoy homestead in Franklin, West Virginia is on the National Register of Historic Places.

But for all her love of history and family, Mary Hille’s strongest passions were for what she could lay her hand to in the here and now.

Mary Hille was a woman of quiet, deep faith and great humility. From a young age she was active in the United Methodist Church, where she remained a regular attendee and a recognized leader well into her 90s. She kept up with other educators in the public sector through her affiliation with the Bath-Highland Retired Teachers Association. In the civic realm, she was a devoted member of the Monterey Garden Club and a proud United Daughter of the Confederacy. She was a popular speaker in many of the organizations to which she belonged, an unfailing supporter of fundraisers to benefit the community, and an eager (and regularly successful) entrant in competitive events hosted by the Garden Club and the county’s fair and festivals.

Never happier than when outdoors, Mary Hille would find entertainment from dawn to dusk hiking, swimming, birding, looking for mushrooms and other wild edibles, especially at her beloved family cabin in Hightown, Virginia, and working in the garden at her home in Monterey. Indoors, she favored reading and working puzzles. Her treasured library contained books old and new, ranging from religious works of all faiths, biographical writings, and other nonfiction to historical novels, mystery, suspense, and even thrillers. It also included numerous reference works about botany, horticulture, cooking, flower arranging, crafts and do-it-yourself projects, as well as considerable aids for students of the Bible and Christian missions.  Ever-active of mind, Mary Hille always kept a variety of word puzzles, brain teasers and a jigsaw puzzle in process beside the stack of books she was reading.

A common observation about Mary Hille was that she was always ready with a kind word for everyone and a cross word was never heard to pass her lips. A chief value of hers was respect, which she accorded to everyone she met and to the world she lived in. This was reflected in the causes she supported through donations and activism. She was passionate about humanitarian aid to the neglected, the civil rights of all people, whether at home or abroad, and improving quality of life for all in society through efforts aimed at increasing literacy and acceptance and combating poverty. Wildlife and nature conservation were no less near and dear to her heart. Perhaps for this reason and because she believed in always making the most of what she could with what she had, she felt a special affinity for Native American peoples and their way of life.​

She will be remembered as a dedicated teacher, student and gardener, an avid lover of nature, history and plentiful good food (especially if sweet), a person of cheerful and resilient spirit, attentive and supportive as a listener, and a woman who communicated less by her words than by her gentle actions and unhurried presence, who left her loving mark on the people and places she encountered.

Throughout Mary Hille’s life, that wondrous joy of hers that the Camp Nimrod girls found so infectious, the gusto with which she would join them in singing campfire favorites, and the impish twinkle of her merry blue eyes (which only she would consider hazel) betrayed her all-out love of life and her satisfaction with a life lived well.

A funeral service and celebration of life will be conducted 11 a.m., Monday, April 30, 2018 at Monterey United Methodist Church with the Rev. James Tongue and Pastor Bobbie Jo Gardner officiating.

Honorary pallbearers will be family and friends in attendance.

A luncheon reception will follow the service. The family will retire to Monterey Cemetery briefly for the committal service, and then return to the church to join the reception. All at the reception are encouraged to linger for fellowship and to visit with the family upon their return.

The family takes this opportunity to publicly recognize and extend special thanks to Peggy Hiner, primary caregiver to Mary Hille during the last four and half years of Mary Hille’s life. By her loving service, friendship and devotion, Peggy spared no effort to ensure that Mary Hille was comfortable, safe, happy, and fulfilled. The members of the caregiving team Peggy assembled are due the family's grateful acknowledgment, as well: Helen Vinson, Gaynelle Siron, and Dallas Waybright. No thanks can ever be enough.

To send flowers to the family or plant a tree in memory of Mary Hille McCoy, please visit our floral store.

To order memorial trees or send flowers to the family in memory of Mary McCoy, please visit our flower store.

Reception and Period of Visitation