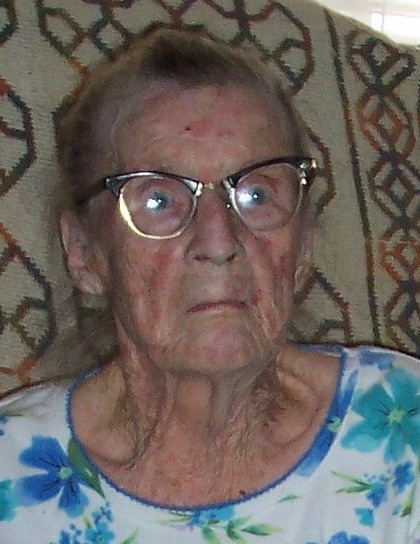 Mary Catherine Smith, 92, of Blue Grass, died Friday, April 13, 2007 at Alleghany Regional Hospital.  She was born May 2, 1914 at Valley Center a daughter of Clarence and Wilda (Rexrode) Bird.

Mrs. Smith was a member of the Green Hill United Methodist Church.  She was a homemaker and had worked at Aileen, Inc.

She was preceded in death by her husband, Loy Milburn Smith in 1947; two sons, James and Ralph Smith; two brothers and five sisters.

She is survived by a daughter and a son-in-law, Sis and Ivan Puffenbarger of Blue Grass; three sons and two daughters-in-law, Charles E. Smith of Frost, WV; Loy M., Jr. and Pat Smith of Boise, ID and D.T. and Kay Smith of Staunton; 16 grandchildren; 14 great-grandchildren; a brother and his wife, Charles D. and Ruth Bird of Churchville and a number of nieces and nephews, including a special niece, Joyce Shaffier.

A funeral service will be conducted at 2 p.m., Monday, April 16, 2007 at Obaugh Funeral Home in McDowell by Pastor Chip Hill.  Burial will be in Green Hill Cemetery.

The family will receive friends one hour prior to the service; however, friends may call at the funeral home throughout the day on Sunday.

To order memorial trees or send flowers to the family in memory of Mary Smith, please visit our flower store.