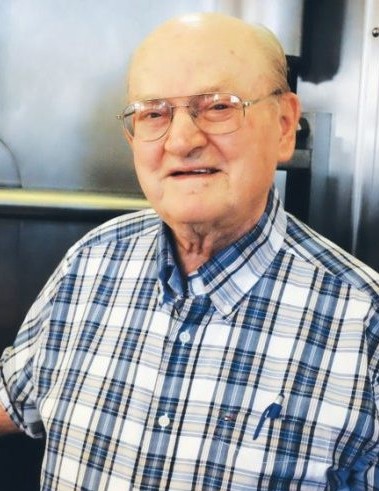 Olin Ray Sponaugle, 92, of Blue Grass, passed away, Thursday, October 11, 2018 at Hospice of the Piedmont in Charlottesville.

On June 11, 1948 he married Norma Lee Rexrode, whom he met at Franklin High School.

Following his graduation from Franklin High School, he attended Potomac State College, majoring in accounting. His first banking job was with National Capital Bank in Washington, D.C. prior to being drafted into the U.S. Marine Corps during the Korean War. Upon being honorably discharged at the rank of Corporal in 1953 he joined the staff of Crabbottom Bank, now The Blue Grass Valley Bank – where he spent 37 years as cashier, Director and CEO. Mr. Sponaugle retired in 1991, but continued as a Director for an additional 27 years, stepping down March 22, 2018 with 64 years of dedication to The Blue Grass Valley Bank.

Additionally, Olin enjoyed spending time on his farm, traveling with his family and will be remembered as a very quiet and thoughtful “man of few words.” “Pap” will be lovingly remembered by his grandchildren as “the best granddaddy they could have ever had.” In his later years, Pap would be ever present when he would hear the grandkids outside or in the garage tinkering and was always ready to go supervise or help on the farm. Most of all, his nightly calls to check on each of them will be greatly missed.

In addition to his parents, he was predeceased by his son, Kerry Sponaugle; and brother, Merle Sponaugle.

Honorary pallbearers will be friends in attendance, as well as members of the Blue Grass Ruritan Club.

To order memorial trees or send flowers to the family in memory of Olin Sponaugle, please visit our flower store.