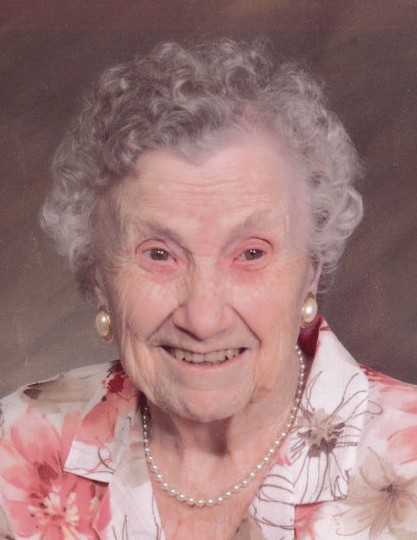 Ollie “Marie” Rexrode, 94 of Staunton, and formerly of Hightown, passed away Sunday, Dec. 9, 2012 at Augusta Health.

She was born May 31, 1918 in Blue Grass, a daughter of the late Albie and Sadie Frances Simmons Puffenbarger.

On Aug. 10, 1937, she married Kenton Marshall Rexrode, who preceded her in death on March 16, 2002. Additionally, she was predeceased by her sister, Anna Margaret Axel; and three brother, Clarence, Howard and Melvin Puffenbarger. She was the last member of her immediate family.

Mrs. Rexrode was a homemaker, who had a strong work ethic and an engaging personality. She was a member of the former Union Chapel United Methodist Church and enjoyed working on crossword puzzles and needlework. Mrs. Rexrode lovingly devoted her life to family and friends.

She is survived by two daughters, Betty Grant and husband Wayne of Waynesboro and Patricia Smith of Waynesboro; four grandchildren, Scott Smith and wife Michelle of Hightown, Shawn Smith of Scottsville, Paxton Grant of Hightown, and Lora Morse and husband Jerry of Jacksonville, N.C.; three great-children, Ethan Kent Smith, Emily-Marie Morse and Andrew Thompson; two sisters-in-law; a number of nieces and nephews; and a special friend, Vera Brown of Fishersville.

A funeral service was conducted 11 a.m., Friday, Dec. 14, 2012 at Obaugh Funeral Home in McDowell with the Rev. Richard Gibson, the Rev. Warren Grant and the Rev. Andre Crummett officiating.

Burial will be private.

Honorary pallbearers will be family and friends attending the service.

Active pallbearers will be family and friends attending the service.

The family will receive friends from 6-8 p.m. Thursday at Obaugh Funeral Home.

To order memorial trees or send flowers to the family in memory of Ollie 'Marie' Rexrode, please visit our flower store.